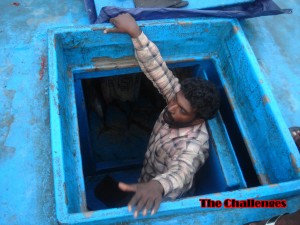 As they migrate all over the coast of India, these deep-sea fishing vessels confront many problems. While fishing in the deep seas with their small-mechanized boats, they are often taken into custody by the Coast Guard for questioning. Confused by the intentions of the Coast Guard, the innocent fishermen try to escape and fall into unnecessary legal hassles and problems. Moreover, not knowing the local dialect and culture at the distant landing centres, often leads to many difficulties and problems. Further, even though their preferred fishing technology, long-lining, does not adversely affect local fishing catches, and is an eco-friendly fishing practice, there is often antagonism towards these fishermen by local fishermen, mainly due to the jealousy emerging from better fish catches and also from the local ignorance of long line fishing methods. They are treated unfairly by the locals and the police.

Huge and escalating capital and operational investments are also a major problem, which fishermen never take into account. As the duration of their fishing voyages has increased over the last 20 years, so have the sizes of their boats, leading to excessive capital requirements. Since most of the capital comes from the unorganized sector (through moneylenders), the servicing of this debt becomes excessive. Finally, the inherent risks of operating in the high seas, arising from both natural causes (such as extreme weather) and man-made causes (as was demonstrated by the firing from an Italian ship in Indian waters recently), is very high. It is in this backdrop that these fishermen decided to form an association of their own, with the support of South Indian Federation of Fishermen Societies (SIFFS), a prominent fishermen federation of cooperatives in South India.