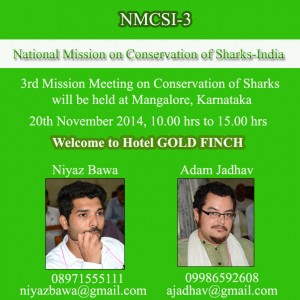 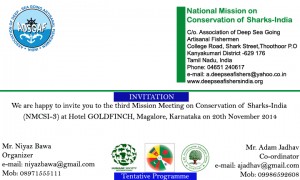 The location has been fixed for NMCSI-3 on 20 November. It will be held at the Goldfinch Hotel in Mangalore. See the image below for a tentative agenda and click to enlarge. 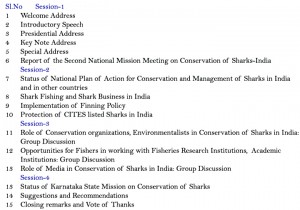 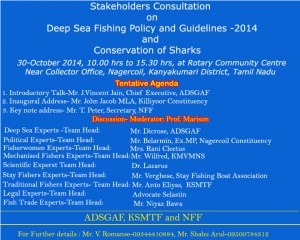 The meeting is to be held at the Rotary Community Centre on 30 October from 10 a.m. to 3:30 p.m. in Nagercoil. Click the image above to read more details. 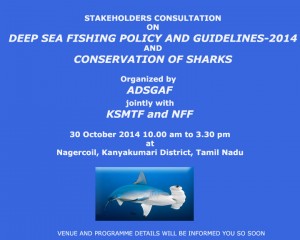 This comes as ADSGAF is reviewing deep see fishing policy options and planning to propose its own alternative policy.

The fishermen’s demand of not to permit any more foreign fishing vessels in India is overruled by the Committee headed by Dr. Meenakumari in the report entitled ‘Report of the Expert Committee Constituted for Comprehensive Review of the Deep Sea Fishing Policy and Guidelines’. This report recommended a fleet size of 1178 Deep Sea Fishing Vessels (DSFVs) for deployment in the Indian Exclusive Economic Zone (EEZ). This includes the existing DSFVs and the additional numbers of 270 vessels (240 tuna long liners, 15 purse seiners and 15 squid jiggers). The Committee also contended that the estimated marine resources in the EEZ are 4.41 metric ton.

The Committee under estimated the fishing capacity and expertise of the Indian fishermen. The contention of Committee is that Indian fishermen are not trained to work on DSFVs, and recommended for the engagement of foreign crew in onboard DSFVs with an annual salary of US $ 25,000; till the requisite skill is developed in the country. The versionn of the Committee is that India is presently lacking expertise to exploit resources in marine waters, beyond 500 meters. Hence technology transfer through acquisition of foreign fishing vessels and, or, joint ventures/leasing, etc. may be considered for this area till the domestic capacity is fully developed. The Thoothoor fishermen in the lower south-west coast of India are capable of fishing beyond 500 meter depth; as their normal fishing area is beyond 500 meter depth. They spend more than 35 days in the deep sea for fishing.

Another issue to be addressed is the ‘depletion of marine resources and need for sustainable fishing methods’. The sustainable fishing methods have been advocated by many agencies state, central, and international levels. This approach is targeted towards the sustainable livelihood fishermen, the marine resource dependent communities. If the conservation approaches in fishing is for the sake of fishermen, how can one consider the foreign fishing vessels that are detrimental to marine wealth? The foreign vessels can fish any species anywhere in India! The Ministry of Environment and Forests, conservationists are coming with the proposal of ban of sharks, ray fishes, etc. But in India we have 4.41 metric ton marine resources and among the resources what is the percentages of sharks and ray fishes?

In the above context, fishermen are very much distressed. With this backdrop, ADSGAF had a special executive meeting to discuss the two issues on 18 September 2014. Mr. Selvorian, the President of the ADSGAF chaired the meeting. The followings are the major decisions taken at the meeting.