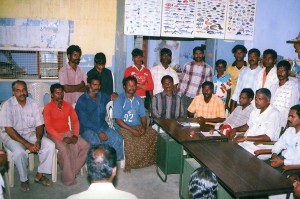 Rescue operations are inevitable in fishing. Causalities may appear at any time in the sea. Even though Government services are available for doing the rescue operations, many times they won’t be available at the spot on time. Most of the times our fishermen rely on other fishers to rescue them and bring them safely to the destination.

Repatriation is also important because if the rescued people are from other countries, the Government charge cases under various sections. It is not easy to see their mother land. Understanding the importance of the issue, ADSGAF extend its hands for repatriation operations also. For example, we have been involved in fishers being released from Sri Lanka.