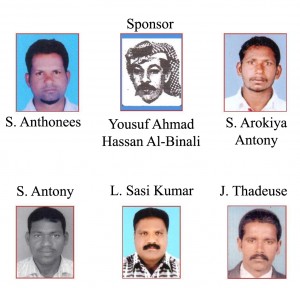 Urgent action is needed to release the poor innocent five Indian fishermen who are languishing in Iranian Jain from 22.09.2014. The five fishermen are L. Sasikumar, Passport Holder of F. 2284582, S. Anthonees, Passport Holder of G 2277083, S. Antony, Passport Holder of J 2723024, S. Arkoya Antony, Passport Holder of L 4129463 and J. Thadheus, Passport Holder of F 7844202. They worked in Quatar under the sponsorship of Yousuf Ahmad Hassan AL Binali with a fishing boat “Navarast No.3339. While on fishing, they were caught by the Iranian authorities on 22.09.2014 and are imprisoned in the Kish Island. They are to pay a fine of Rs. 5.5 Lakhs as fine for the release. It is the responsibility of the sponsor and the owner of the boat to save their workers when they are in trouble. But we came to know that the sponsor has not been shown any interest to release of his workers from the jail. There are initiatives taken by few organizations for the release of the five fishermen and Association of Deep Sea Going Artisanal Fishermen also at the forefront for the repatriation.